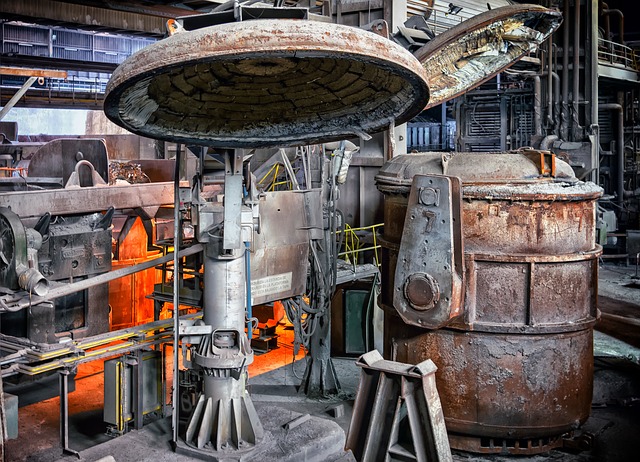 Metal castings are produced in a foundry. Metals are melted into a liquid to cast them into different shapes and sizes. It is then poured into a mould and is removed from it once it starts to cool and solidify. The most common metals that are processed are aluminium and cast iron.

The development of Iron and Steel Industry in India has been consistent. In comparison to China, India had a brilliant beginning. India stands seventh among the world`s largest steel manufacturer by the International Iron and Steel Institute (IISI).

In 2006, India produced around 44 million tones. Government initiatives have increased the growth of the iron and steel industry in India. Some of these measures are, simple tax structure, unrestricted external trade and low import duties. Several social reforms that were introduced by the government helped improve the development process of iron and steel industries in the country.

In the years to come by adopting more effective and efficient technologies for manufacturing companies can augment productivity in Iron and Steel Industry in India. This will effect in amalgamating environmental, social, and economic development objectives as well.

In the future, by doing away with various restrictive government regulations in the areas of distribution, pricing and importing of steel, the consumption, to a significant extent will be influenced by domestic availability of steel.

The casting process has existed for centuries, yet this question still comes up from time to time.  At Smith Foundry we even ask that same question.  Not everything is best made as a casting, and even if it is, there are usually a dozen ways to make it.  The foundry’s job is to gather as much information as we can about the project and desired outcomes and if it makes sense as a casting, quote appropriate tooling and a casting solution that fits.  Sounds pretty simple.

Metal casting has been referred to as “Black Magic” by some, and for somewhat understandable reasons.  It’s not always easy to get your head around the fact that molten cast iron that pours like water can turn into a strong and versatile material when solid.  On top of that this process takes place hidden in a black box of sand.  That is exactly what makes castings such a great option.  Smith Foundry can produce some really innovative and dramatic shapes and features much more economically than any other process.  Smooth, flowing, good looking designs.  3d modeling has helped eliminate some of the mystery, as have 3d printing and solidification modeling.  These tools make it much easier to collaborate with customers on design and to visualize what is going on in the black box.

Nothing wrong with fabrications, they definitely serve a purpose, but I don’t see too many sexy looking ones.  They get the job done, but tend to look like a bunch of building blocks glued together.  Not only do they look blocky, welding opens up potential failure points and there are directional properties to take into consideration.  With castings, not only can you get a sexy looking part, but you eliminate welding and have isotropic properties (nearly the same properties in all directions).  To see examples of this contrast, check out the Accolades section on the website to see some projects that illustrate these differences.

Metal castings are produced in a foundry. Metals are melted into a liquid to cast them into different shapes and sizes. It is then poured into a mould and is removed from it once it starts to cool and solidify. The most common metals that are processed are aluminium and cast iron.

The process of casting is centuries old. Approximately 90% of manufacturing goods depend on this for its components and parts. Car and trucks are the largest markets for iron castings. Some non-ferrous metals are also used either for casting or as alloys added to steel.

The modern foundry industry had its origin in Kolkata during the British rule to meet the needs of Indian Railway, textile, and allied industries.

We an ISO/TS 16949 company started in 1974 . We are indulged in Manufacture & Machining of ‘Ready to Assemble & Sub-assembled” Grey Iron Castings components.

we will reply within 24hours